Here are a couple of bugs that I found:
1) Bones in animation mode sometimes don't align: 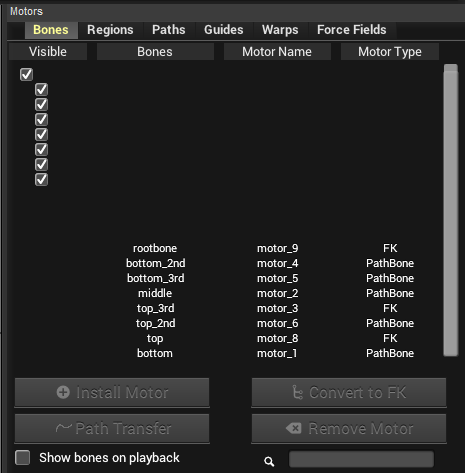 2) When I open "Control points motor" editing and select Animate tab, then animation data doesn't show up unless the mouse cursor moves over it (probably that triggers some sort of window refresh)
But to get the actual keyframes to show up, I have to scroll inside the animation data window, otherwise it remains empty: 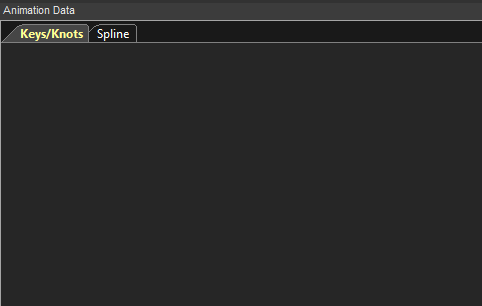 3) Changing Opacity attribute in "Control points motor" animation, doesn't show up as a new keyframe in the animation data window. Here I have selected frame 100 and set the opacity to 0, but there is no blue dot in the timeline:

Which leads to difficult keyframe editing, I set these "invisible" attributes all over the timeline, it's a hell a of thing to edit them later on, because I have to either remember or scroll through the entire timeline to find them. There should be a blue dot.

4) If I zoom out too far in the Animate mode and then zoom back in, the window can no longer be navigated using the right mouse button, it just doesn't move. I have to switch back to Rig mode and then back to Animate, which resets back to the default zoom level and position allowing me to move again. Would be useful to have a button which resets camera back to the default position.

5) When I create a new warp effect and assign it to some mesh then the application crashes. I have tried this in different projects, with different meshes, it always crashed.

6) If I move the bones too much or create a new one in Rig mode, after having already created all the animations, then the animation clips don't update with the new bone structure. For example, I added one bone right after the root bone in the hierarchy and moved the root bone slightly out of place. Then I switched back to Animate mode, but the bones kept the old alignment, they never matched with the one I have in Rig mode. I had to delete the animation clip and create it from scratch.

7) Mesh mode often picks up empty space as a valid texture mesh, even though it is completely transparent and not even close to the real image.

8) Animation playback tends to slow down the longer I use the application. It could be that my video card isn't powerful enough and that is a bottleneck, but the issue is that when I launch the app, all the animations play back at their actual rate, but after a while they slow down. If I export the animation, then of course it plays back at the correct speed. So not sure if this is a problem with Creature or my hardware. Would have to test it on a different computer perhaps.

9) Some of the preference attributes aren't saved from one session to another. For example the "show bones of playback" checkbox is always activated when the app is restarted.
Top

Thanks for the submission, will investigate.

For some of them:

3) Should work, just checked with a couple of samples and it is there. However, your screenshot is interesting so will warrant further investigation... Can you describe how to replicate this issue?

4) You can press a hotkey 'F' to focus the camera back to the character.

5) Warp mode is getting removed soon, use a combination of mesh motors instead.

7) It picks up things when the pixel values in the space is not exactly 0. So ensure that the image in those regions is clean.
Top

RGB and Opacity knots do show up in the animation knots editor:

Could there be platform differences for the editor? Some of the issues might not appear on Mac, but on Windows and vice versa. I assume you're using C++ for the editor codebase, and cross compiling the same code to different platforms. It's possible that for the most part the result is the same, but when it comes to GUI both platforms could behave differently.

Could you also test these issues on Windows? I discovered them on that platform.
Top

Yes this is on Windows, but will investigate more to see when it happens again.